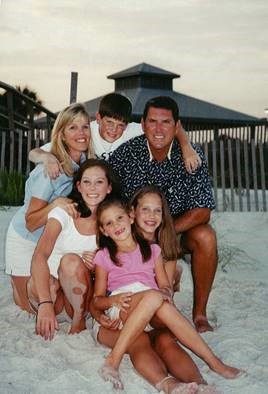 Tisdale and Kyle Mcdonald with Kade, Brooks, Mary-Kyle and Blair, circa 2000.

As employees of Argent Financial Group who also happen to be daughters of the CEO, we have a unique perspective on a man we call “Dad” at home and “Kyle” in the office. The best thing we’ve learned is that Kyle McDonald is the same man wherever he is.

The kind, secure and visionary man who was “all in” as a dad when we were growing up is the same man who is “all in” as the leader of a rapidly growing and very successful company. We’ve seen the humble confidence he exudes — which made us feel secure as children — have the same effect on our fellow Argent employees. There never was, nor is there a question about whether Kyle McDonald is a values-driven man. We were taught that if you do the right thing, are honest and work hard, everything else will take care of itself.

Many times we saw him do what was best for our family, even though it would have been easier for him to have taken a different path. We see the same dynamic at Argent. He doesn’t let the temptation of a quick profit or another empty promise deter him from doing what is best for the company and, especially, for our clients. His duty to our clients trumps all other considerations, just as his duty to his family came before everything else.

So, what was it like to grow up in a family headed by Kyle McDonald? Well, for one, we always knew where we stood and where we were going. It seems like our father was born knowing what he wanted to do; he always had a vision of what path he would follow. He trusted that his vision would take him where we needed to go, and we trusted him. Because of his confidence, our family always had a feeling of stability and security that he provided without really voicing it. No matter what happened, we knew things would be OK if our dad was there. And he always was.

When he was home, he was fully with us — really talking with us and listening. He left work at work. If he faced difficulties at the office — and, of course, everyone does — you never knew it when he got home. We never had to dread dinner because something awful had happened at work. We knew he ran a company, but that was about it because he was focused on our family when he was with us.

It wasn’t until we began working at Argent that we realized the impact Kyle has on this company and on the financial industry as a whole. That was eye-opening and wonderful. We would have probably lived our entire lives without knowing the kind of impact our father has because it would never have occurred to him to brag about it or even bring it up.

With the help of many good people, he has built something big in Argent Financial Group. Yet, we’ve never seen “big” as something our father cared about. For example, he and my mother chose to live in a relatively small town — Ruston, Louisiana — because it’s the kind of town they were raised in and the environment in which they wanted to raise their children. It’s a place where people matter, where there are few pretensions and where you judge your life based on how much you help instead of how much you have. If you can get my father talking about Ruston, he is a happy man.

He is also a happy man if you get him talking about grandchildren. Expect to see a lot of photos if you bring up the subject. He has been there for the birth of all three of his grandchildren. No matter where he is if he hears that someone is in labor, he is on the way, and he always makes it in time — even if, once, he made it with just 10 minutes to spare. This unbroken record may soon be put to the test, though, because the due dates of his fourth and fifth grandchildren are on the same day, in two different states. But, knowing our father, we bet he figures out a way to be at both births, no matter what it takes.

“Whatever it takes” is a pretty good description of Kyle McDonald. In whatever role he takes on — father, husband, CEO, grandfather, community member, friend — you can be sure that this incredible man who we are so fortunate to call our Dad will do whatever it takes to make sure people are taken care of.