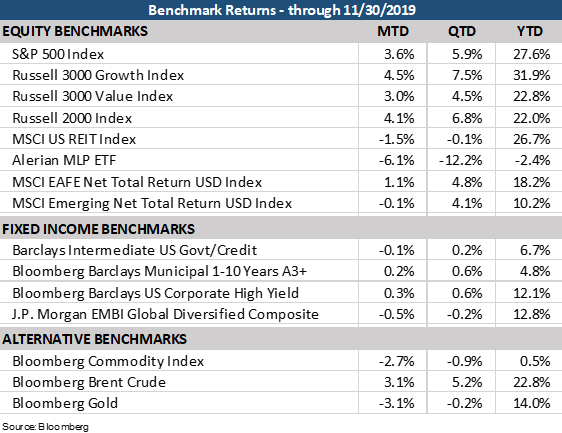 Global stocks continued their upward trend in November. The MSCI ACWI Index, a common measure of both developed and emerging-market stocks, gained 2.4% in the month. This index broke through highs not seen since early 2018. U.S. stocks continue to lead returns across the world, gaining 3.6% in November. Amazingly, the S&P 500 Index closed at a record high 11 times during its 20 trading days in November. Foreign equity markets were positive in November but unable to match the returns of U.S. stocks. Developed international stocks gained 1.1%, while emerging-market stocks edged lower by 0.1%. 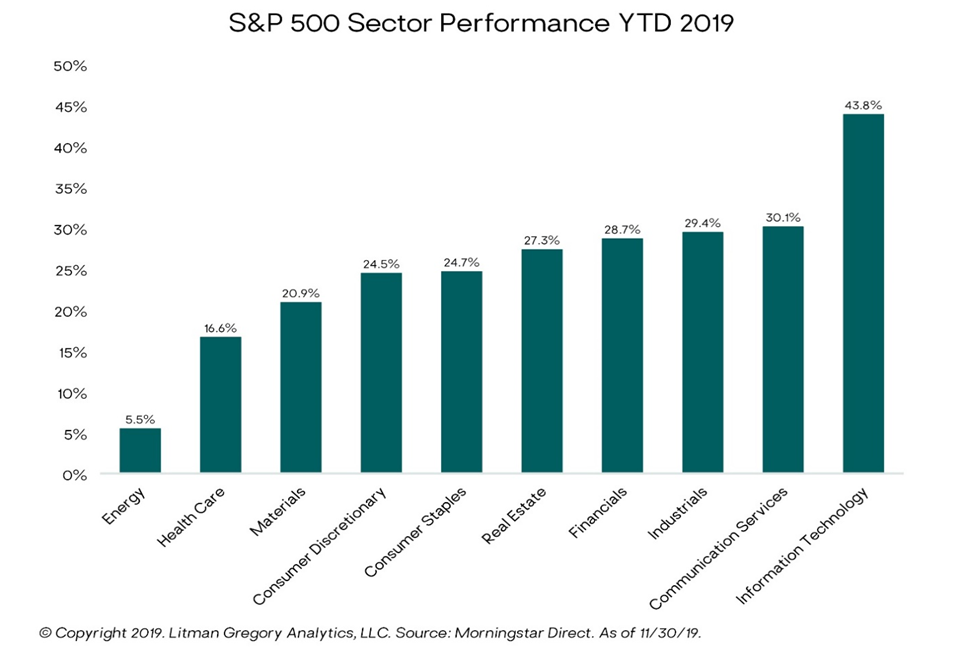 Currently, every underlying sector of the S&P 500 has a positive year-to-date return (2013 was the last calendar year where all sectors were also positive). The majority of sectors are clustered around the S&P 500’s gain of 27.6%; however, technology and energy are outliers on either end. If the tech sector return holds, it would be the sector’s best calendar year return this decade—a fitting end to a decade that has been dominated by technology and tech-related businesses. Whether many of these businesses thrive in the 2020’s remains to be seen, but it will be hard for their share prices to match the sector’s 17% annualized return this decade.

As is typically the case with investing, there is always something to worry about—and that “something” continues to be a trade war between the U.S. and China. Hong Kong’s pro- democracy party won 85% of the seats in the local elections, a massive increase on the 25% seen in 2015. A few days later, Donald Trump signed the Hong Kong Rights and Democracy Act into law, triggering tension in Beijing as the text supports the demonstrators. This development is making it tricky to finalize the US-China trade truce, especially as Beijing has only offered very gradual changes to intellectual property rights for the 2022-25 period. A “phase one” trade deal was supposed to be agreed upon in November, but negotiations continue to drag on and uncertainties linger. The two sides have about two weeks to agree on terms before the United States is set to impose another round of tariffs on Chinese goods on December 15.

In the fixed-income markets, the U.S. Treasury yield curve steepened last month following a Federal Reserve rate cut late in October, which brought the short-end of the curve lower, while the longer-end inched up during the month. Most bond markets were flat to negative in November. The U.S. core bond index lost 0.1% but is still up an impressive 6.7% year to date. High-yield bonds and emerging market bonds were mixed, gaining 0.3% and losing 0.5%, respectively. At this point, bond markets don’t expect the Fed to cut for a fourth time when their December meeting concludes.