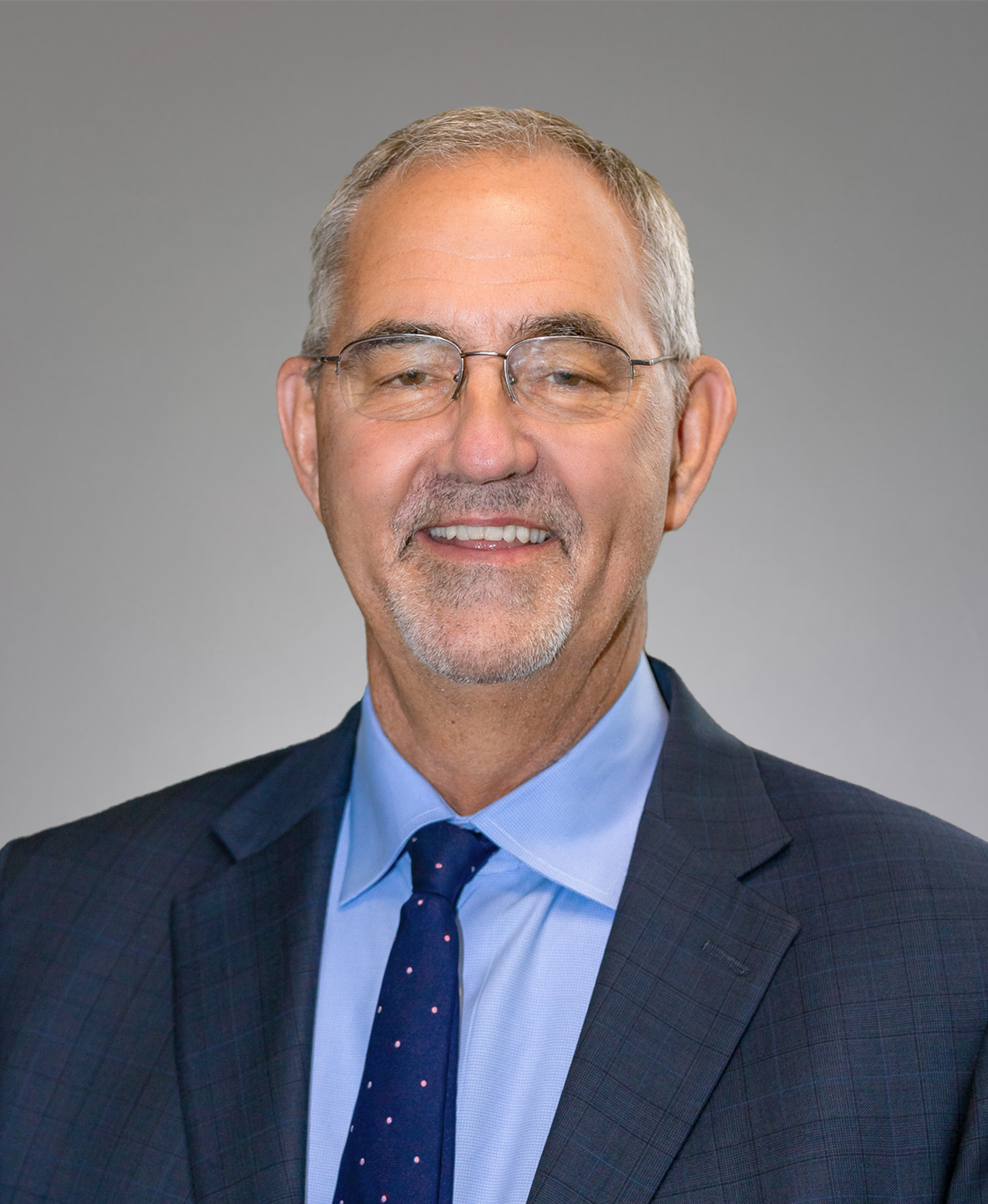 Time certainly has a way of changing perspectives. As of the middle of March last year, the global markets were in the midst of a virus-fueled free fall which ultimately infected the U.S. financial markets. Within weeks, the impact of the pandemic’s market reversal led to the S&P 500’s most volatile month on record and its worst performance in a decade. Countries were locked down, stores were closed, and employees were furloughed. In those early days of the pandemic, more than 3.3 million people filed for unemployment insurance, and over the following five weeks, initial claims surged to 26 million.

Even as headline news stories became daily reminders of a continuing virus spread, prompt and coordinated efforts from the Federal Reserve and Congress provided a floor for a rather slippery, stalling economy. Quickly pumping $3 trillion of additional liquidity into the Fed’s balance sheet helped calm the increasingly fragile financial markets, while prompt legislative actions from congressional leaders provided an initial $2 trillion in relief payments that bolstered businesses and families early in the crisis.

Following closely on the heels of government stopgap efforts, the convergence of home and work life led to a growing percentage of the labor force working, shopping and streaming communications and education from their homes.

Over the next few months, pandemic isolation took its toll, and house hunting became a new pastime, driving sales to new highs and housing inventories to new lows. In short order, manufacturers began turning their lights back on, sparking renewed signs of life and reviving consumer confidence levels back to new four-month highs. By July, most financial markets had recovered from the March lows with investors returning and bidding up shares of companies representing the new “normal.” Stocks that benefited most from the renewed spending spree included many of the now familiar household names, such as Amazon, Apple, Facebook, Google and Netflix.

A year later, much has changed. Vaccine development was successful, and despite a number of false starts, restaurants are reopening, and travel is becoming less restrictive. Domestic airline traffic has surged from an April 2020 low (87,500) to a recent high in July of 1.9 million TSA checkpoint passengers. A full recovery will take time, however, given the global resurgence of the new COVID variant Delta and supply chain issues that have impacted a number of business recovery efforts. Even as COVID cases from Delta variant rise, however, the likelihood of further lockdowns, at least at this point, seems unlikely. Businesses are bringing staff back to work while incorporating new hybrid work schedules. “Help wanted” signs are becoming commonplace, mall traffic is returning, and highway congestion is once again driving fuel prices to new multiyear highs.

One of the largest economic casualties of the pandemic last year was the dramatic loss of jobs.  Today, however, the job recovery is rather remarkable. Unemployment rates now stand at 5.9% versus a high of 14.8% in April of 2021. Most recent data also point to continuing unemployment claims, falling nearly 82% from this time last year. This trend is likely to keep improving as unemployment subsidies roll off and attractive job opportunities increase. 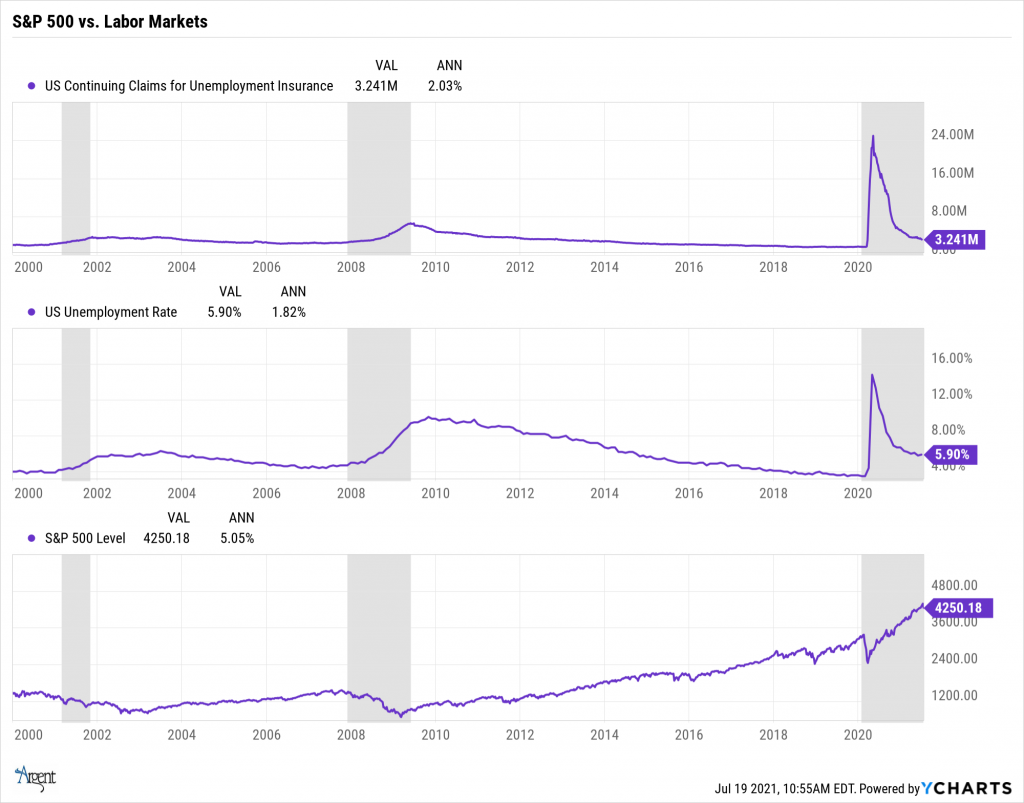 Wages have also been on the upswing in certain segments of the labor market. As examples, the food service and restaurant industry are posting year-over-year wage growth of 4.1%. Concerns are that higher wages and increasing commodity prices (transportation, oil, lumber and steel, for example) are sticky and not transitory, as some have predicted. Certainly, these concerns deserve merit in some segments of the economy, but evidence does not yet exist of any lasting durability in recent price increases. As market demand stabilizes, we anticipate some return to normalcy with the current price and supply imbalances now impacting manufacturers, supply chains and the labor markets. Until then, pricing pressures will continue to be top of mind as will concerns over timing and magnitude of any rate hike.

With the job market and economic signs recovering, consumers are increasingly more confident. This growing confidence was evident in some recent surveys including June’s Conference Board Consumer Confidence Index. In that survey, consumer confidence rose to an index level of 127.3 from the prior month’s 120 reading. Positive notes included improvements in economic outlooks, job availability and inflation expectations. This perspective was also mirrored in July’s Michigan Consumer Sentiment Index that documented an 11.45% improvement from last year. Aside from the optimistic outlook for the job market, a few negative survey comments indicated concerns over increasing home and auto prices. Not surprisingly, these concerns translated into an expected year-ahead inflation level of 4% but with a longer-term outlook trending downward to 2.8%.

One limiting factor that has impacted finished goods sales and prices has been the inability of manufacturers to handle new customer orders. Inventories are low, materials are scarce, and supply chains are often missing. Freight costs are on the rise as well, with rates up by 11% (Cass Freight Index). And although the recent PMI (Purchasing Manager Index) booked its 13th consecutive month of growth, the underlying message reinforces a growing backlog of new orders with suppliers struggling to meet raw material demands. One of the more visible examples is the shortage of semiconductors, forcing companies to push delivery dates out by months for some manufactured goods. Recent positive news though is that semiconductor manufacturers now expect a relatively quick ramp-up in production, which will boost several industries, including autos, and help them play catch-up. Last month, car companies showed their dependency on the semiconductor industry with supply cuts costing the global auto industry an estimated $110 billion in 2021.  One trade group, The Alliance for Auto Innovation, believes that the chip shortage could stall auto production for another 6 months with 1.28 million fewer cars made in the U.S. through 2021. 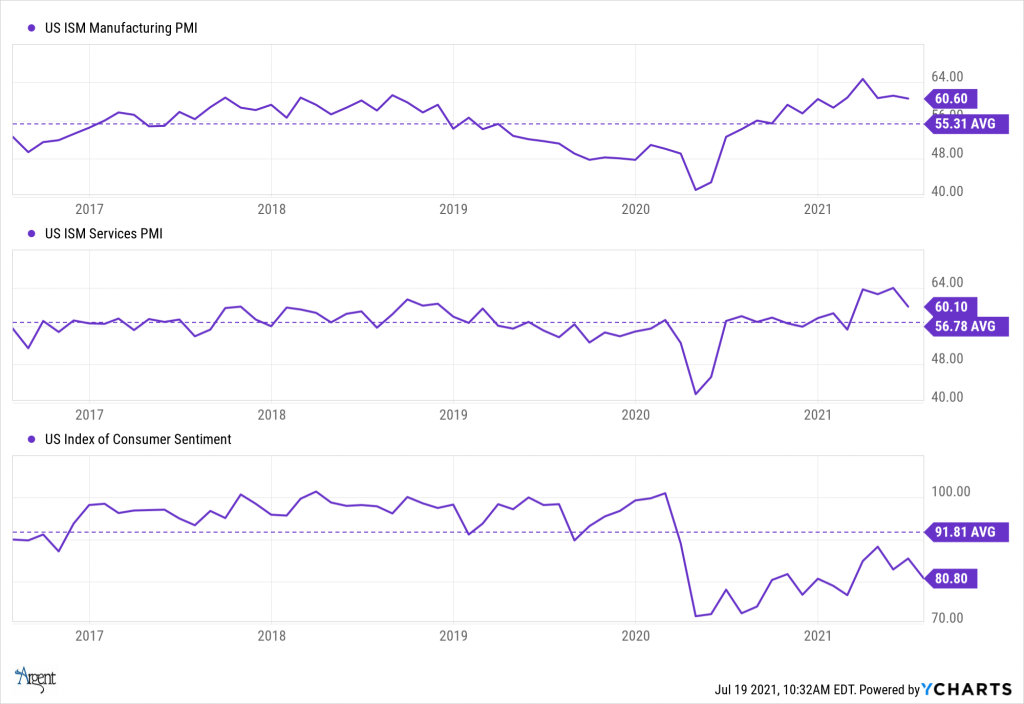 Aside from the supply chain delivery issues, most industries remain relatively optimistic. Labor shortages remain top of mind, but the longer-term business outlook remains positive. That perspective was highlighted in this month’s NFIB (National Federation of Independent Business) Optimism Index, which posted its highest survey index since last November. The key takeaway was expectations for business improvement six months out. Also reflecting a longer-term positive tone was the New York Empire Manufacturing Index, hitting a record high in July as a result of the strongest level of new orders since 2004.

Recent comments from Fed Chairperson Jerome Powell about inflation conversations, wage pressures and supply chain issues introduced a bit of market volatility and heightened concern for interest rate surprises. Over the past few months, investor complacency has become a bit more frayed. A COVID upswing and the recent jump in headline core inflation of 5.4% (the highest since July 2008) seem to be making investors nervous. This anxiety is translating to market reallocations as fixed income flows appear to be tapering off. Last week (week of June 12), Reuters reported that rising rate fears had reduced broader bond inflows to their lowest level since March with certain sectors, such as high yield, seeing net outflows. Negative returns in most fixed income assets on a year-to-date basis have also done little to dampen credit investor concerns. 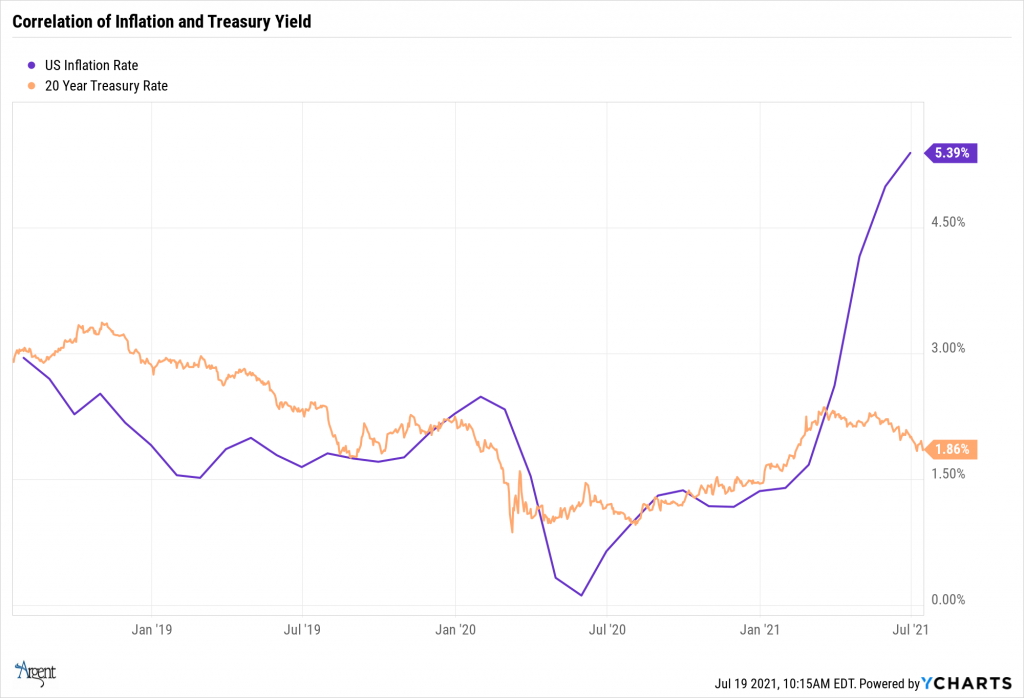 By contrast, equity market returns have managed to remain in positive territory, in terms of both inflows and performance. The S&P 500 year-to-date returns are ahead by 16% with trends continuing to be positive across all sectors. To date, the energy sector leads the pack, up by 31%. Not far behind though are financials (up 23.5%), industrials and technology (both up 16%) and healthcare (14%). The laggards, though still positive for the year, were utilities (7%) and consumer staples (6.5%). Overseas, stocks generally tracked the domestic markets, although earnings growth, valuations and performances of those companies headquartered outside the U.S. often lagged given their slower recovery from the pandemic’s impact on their economies. 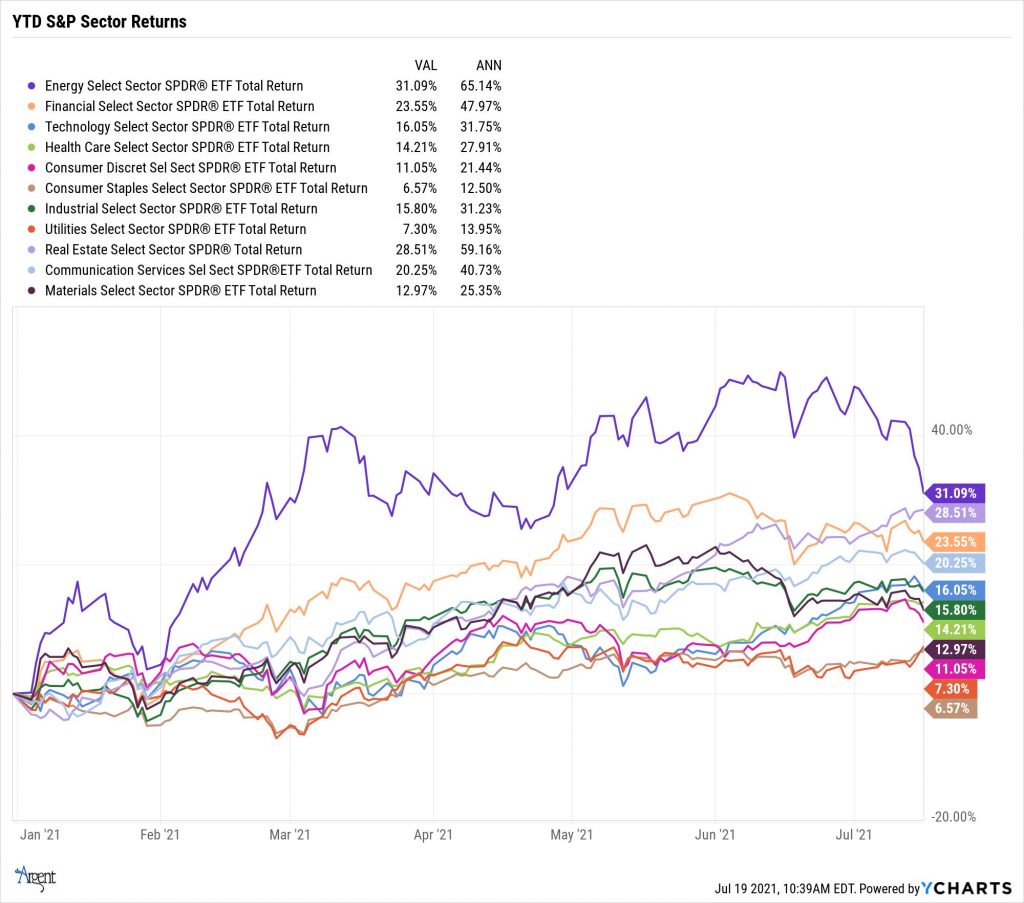 Looking at expectations for the future, the next few months will likely be characterized by heightened financial market risks. Investors are looking for Fed signals about its thoughts and intentions on countering potential inflationary concerns and assessing the potential for economic reversal posed by the COVID variant. Comments from the Fed already noted that the latest inflation uptick was bigger than expected, and the question now is whether it will require central bank intervention. However, Chairperson Powell hinted that he believed these inflation risks were more transitory, and in the near term, investors will be guided by that uncertainty.

Beyond today’s headline, the economic growth of the U.S. remains healthy; that is also the case for much of the overseas markets. Although the rate of economic growth will likely slow over the next several months, trends should remain positive with the economic reboot. Labor markets will continue to solidify as will consumption growth and improved consumer sentiment and business outlooks. Consumer savings rates and household wealth are in good shape. In the meantime, interest rates today and into the foreseeable future remain relatively attractive for business investments.

Although manufacturers have recently struggled to cope with consumer demand and business inventory shortages, this issue should correct itself over the next few months as suppliers get back online and raw materials become more available. Supply channel catch-up will help inventory rebuild efforts and boost delivery times, sales and earnings for manufacturers, suppliers and retailers, while possibly reducing inflationary pricing concerns that worry both the Fed and investors.

As already noted, market messaging will be mixed over the next several months with rising interest rates and COVID-variant concerns dominating conversations and adding volatility.  Recent Fed conversations and inflation fears serve as a reminder for investors that risk management will be key in the months ahead—especially true for fixed-income investors.

Aside from the inflation risks mentioned earlier, tailwinds from both positive earnings surprises and economic rebooting should continue to help the equity markets. Recent estimates from FactSet project an annualized growth rate for the second quarter of 69.3 percent, a growth rate unmatched since 2009. While market turbulence is not out of the question, today’s level of earnings growth surprises is generally not associated with the beginning of a market downturn.

Not Investment Advice or an Offer -This information is intended to assist investors The information does not constitute investment advice or an offer to invest or to provide management services It is not our intention to state, indicate, or imply in any manner that current or past results are indicative of future results or expectations As with all investments, there are associated risks and you could lose money investing