Recently, investors have been concerned about inflation and inflation expectations. Considering the recent fiscal stimulus packages, expected pent-up demand as we reopen from the global pandemic, and a very accommodative Federal Reserve in recent years, it is easy to understand why. However, while year-over-year consumer price index (CPI) measures will most likely rise in the coming months, we agree that it is still too early to tell if inflation will persist following this initial rise. The trade-off between base effects, headline and core price increases, and the slack in the labor market will be important signals for inflationary pressures in the months ahead. Overall, we see an economy reflating as it recovers from a recession, not one on the edge of a hyperinflationary spiral, assuming wages remain in check and the Federal Reserve is able to appropriately adjust their policy as conditions change.

Why Aren’t We Concerned About Inflation Near Term?

We believe that the so-called base effects will be a material driver of an upcoming initial rise in inflation. Consider that a year ago, in April 2020, the economy was approaching a nadir in economic activity due to the worldwide lockdown. The CPI dropped 0.7% during the month—its largest month-to-month decline since 1950 (outside the 2008 financial crisis). When comparing this period to today, year-over-year changes will look larger, simply because of last year’s decline. As shown on the chart, this phenomenon will likely persist through the summer months and normalize later in the fall, when the base effects will eventually reverse and even start working against a CPI increase. 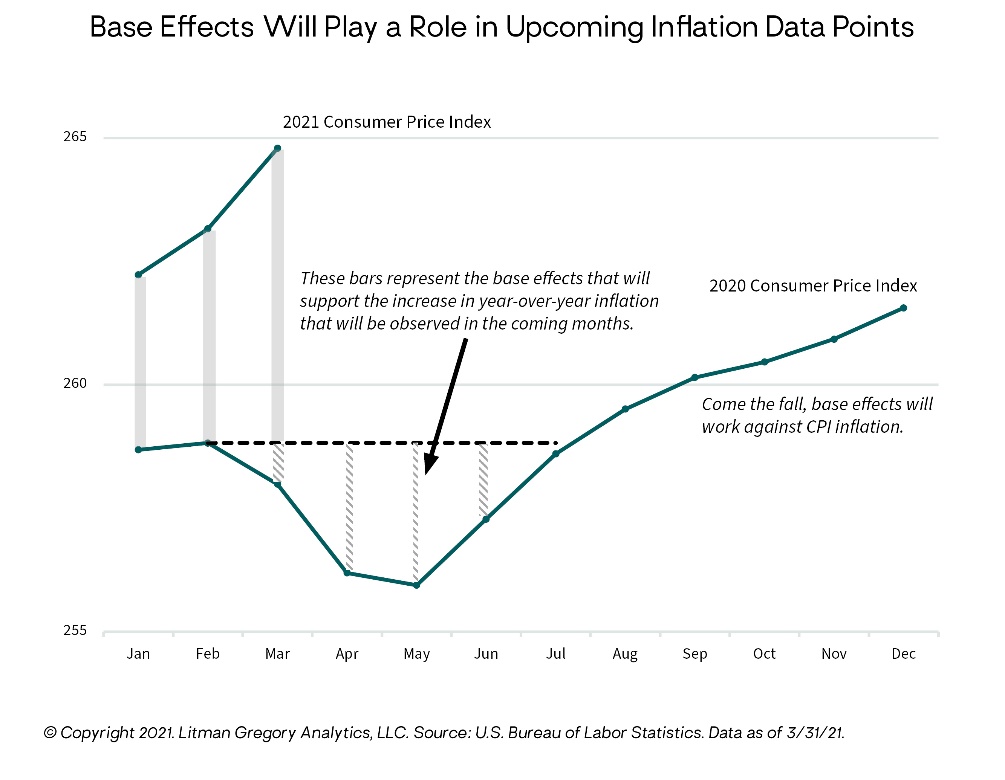 All this isn’t to say the initial CPI increase will be entirely due to base effects. Prices have been rising since the start of this year throughout the economy, including lumber, corn, copper, semiconductors, home values, and rental cars, just to name a few. The impact of the pandemic has caused different forces that have pushed up prices, including the movement of individuals and families away from city centers to larger homes (working from home becoming more acceptable), as well as companies working to survive given lowered demand (rental car companies selling a portion of their fleet amidst higher used car prices to raise cash). Given the expected return in demand across many sections of the economy, these impacts could augment inflationary pressures during the economic re-opening in the coming months. Furthermore, even if inflationary pressures remain temporary, operating margins for individual companies will be impacted, especially if they are required to replace low inventory levels due to the pandemic. If companies can pass some of these higher costs on to customers, it could lead to sustained inflation that would be worrisome.

Still, the Federal Reserve may not react right away with higher interest rates if this situation were to materialize. Take for example what we saw in 2011, when the Producer Price Index (PPI) for commodities was rising at an 11% clip: Headline inflation rose above the Fed’s 2% target, but it was a short-term blip, and the Fed didn’t react. In less than a year, the PPI was back near 0% and inflation subsided.

Another important point is that the Fed looks at different measures of inflation and may focus on some that are not normally widely reported in the financial press— such as the Personal Consumption Expenditures (PCE). This measure is based on surveys of what businesses sell, while the Consumer Price Index (CPI) is based on what individuals are purchasing. While the Fed normally is concerned with “core” measures that remove the potential volatile effects of food and energy prices, one measure they do consider is Headline CPI minus Core PCE, as seen on the bottom panel of the chart. This measure has been low for a number of years, suggesting it will take time to meet the Fed’s now “average” inflation target. In addition, core PCE is expected to only modestly exceed the Fed’s 2% target in the next few months, but The Fed will need to see sustained core PCE inflation, not just headline inflation, in order to justify adjustments to their policy, such as raising interest rates. 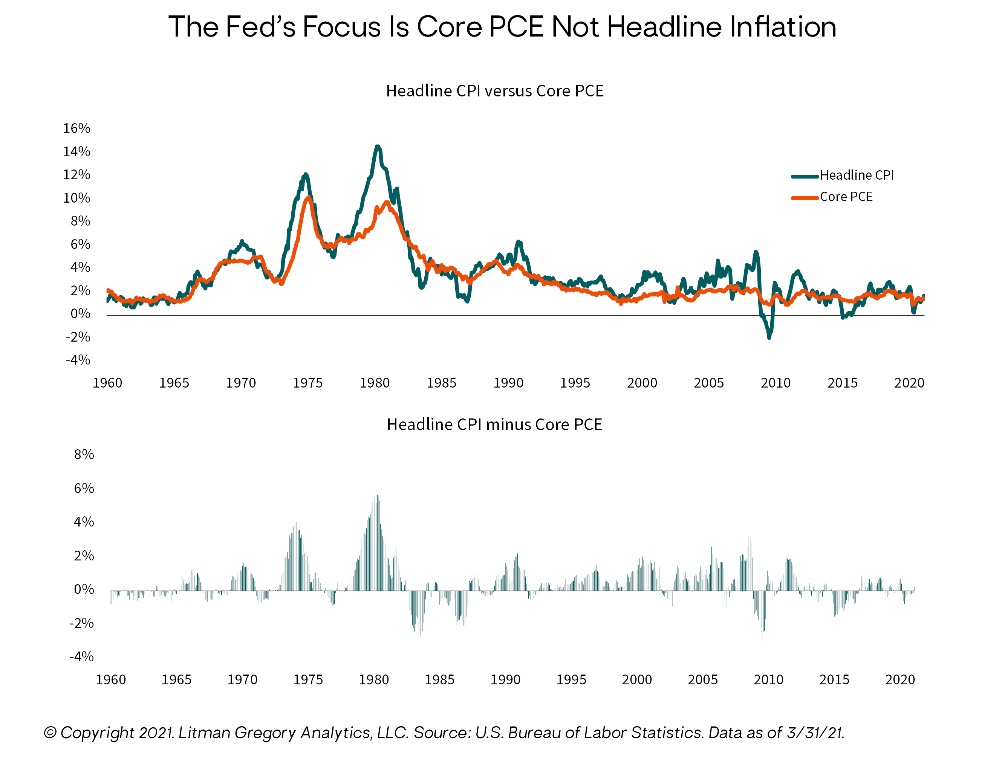 A key fundamental reason why we don’t see sustained inflation as imminent is the tremendous amount of slack in the labor market. Wage spiral inflation can’t really take hold unless the labor market is near or beyond maximum employment.

The chart to the right shows a rough estimate of how far the economy or employment is away from the pre-pandemic trend. If Nonfarm payrolls average 500,000 new jobs each month moving forward, it will take until mid-2024 for employment to reach the payroll trend from before the pandemic. Even if payrolls grew at 700,000 new jobs per month, the lines still wouldn’t cross until the first quarter of 2023. This helps explain why the Fed still doesn’t expect to start raising rates until 2024, once the labor market reaches their preferred level. Until sustained wage increases appear, it is unlikely that inflation will spiral out of control, as most individuals need the confidence and security of a recurring stream of income to feel comfortable spending on large ticket items.

Overall, conditions could materialize for inflation and inflation expectations to rise in the short-term, considering base effects, fiscal stimulus packages, and expected pent up demand as we work through the economic re-opening. However, given slack still exists in the labor market, it will take time for wages to show sustained increases, which will help to limit inflationary pressures. The Federal Reserve remains accommodative and patient at present. We remain vigilant in monitoring these conditions as well as when the Federal Reserve decides to change course. We will continue to adjust our allocation targets and portfolios as we see changes in the inflationary landscape and economic conditions in the months ahead. 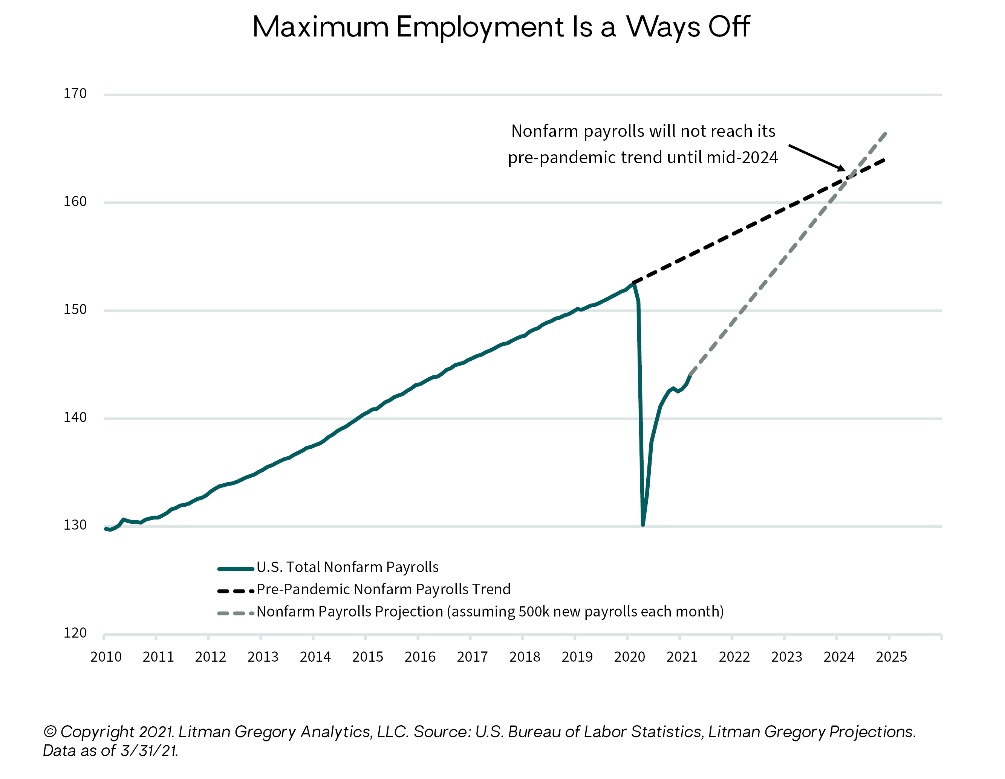 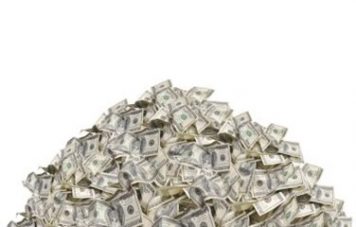 Divorcing a Trustee: Do You Need a Prenuptial?

For any corporate trustee you choose, there should be some minimum requirements, and it’s best to check its reputation ahead of time to find out if its trust relationships end amicably. Originally published on Kiplinger.com December 5, 2022 There are many reasons that...